Founder. Eddie built his first dog cart for Buddha, his companion Doberman in 1989. A mechanical engineer by trade, he brings his lifetime experience as mechanical designer, welder and inventor to the task of designing a mobility cart that supports pets in a bio-mechanically sound way. Ed’s previous incarnations included 10 years traveling the world designing and installing machinery for the corrugated box industry; he’s worked as a hydraulics engineer, an electrician, welder, designed packaging for Nestle, built custom motorcycles, raced for Harley Davidson, was a self-employed contractor and stonemason, arborist and dog trainer. Ed was raised on a New England dairy farm; he has always lived with dogs and cats, as well as an occasional raccoon and skunk. He also designed and built pottery kilns when his wife, Leslie, was a studio potter. Recently, Ed became the certified animal control officer for Buckland, one of the 2 small villages that comprise Shelburne Falls. In this capacity, he enforces local animal control laws, provides boarding for lost dogs and cats, and is on call for animal control emergencies. 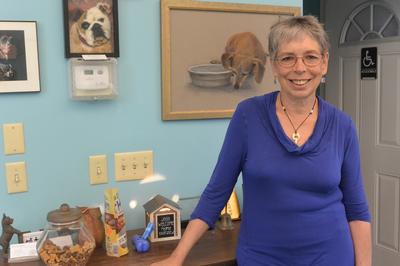 Sales and Marketing, Animal Caregiver. Over the past 20 years, she has personally cared for a succession of disabled dogs including Buddha, Hardy (a Doberman with Wobblers), Autumn (a Dobe with spondylosis), Toby (a Rotti mix with torn ACLs), Nick (a boxer with spinal fracture), Daisy (a dachshund with IVDD), Sweet Pea (a paralyzed pitbull), and Nelix (a 3 legged cat). Currently, Leslie is the caregiver for Webster, a chi-weiner born with no front legs, who get around in their front wheel carts, Neville, also born with no forelimbs, and Finch, a paralyzed chihuahua. Leslie has worked with canine rehab practitioners and holistic vets to help her own pets and shares her experiences of living with disabled pets with our customers. Prior to founding Eddie’s Wheels with her husband, she was a successful studio potter and teacher, and a co-founder of Shelburne Arts Coop. 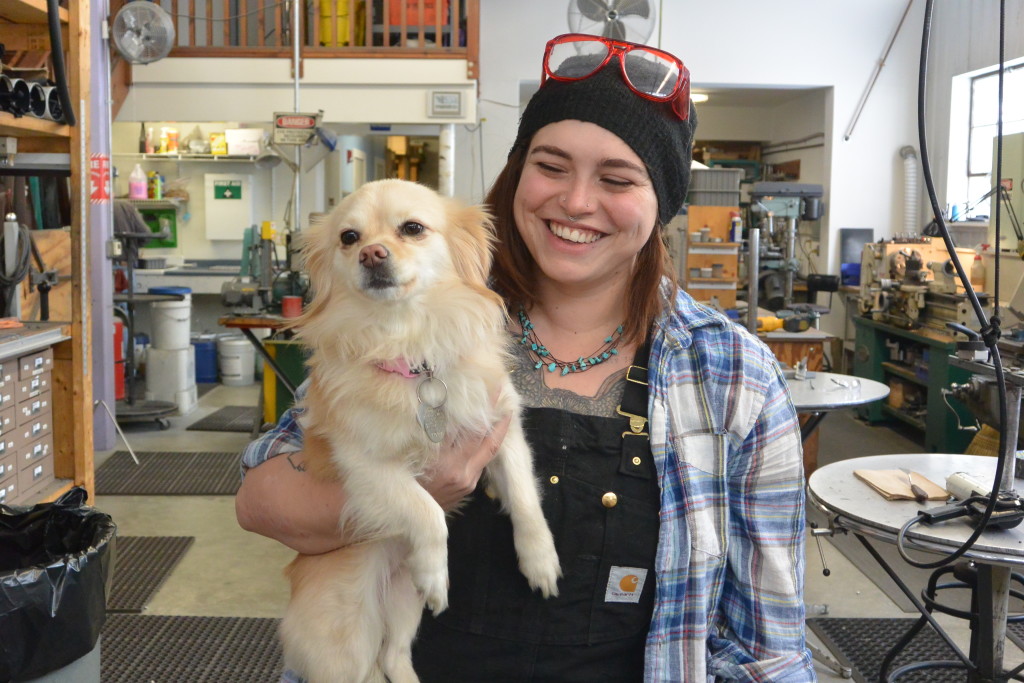 The daughter of Leslie and Ed, Chris grew up watching the business evolve from a single work bench in the basement, to the full factory in Shelburne Falls. Since Eddie's retirement a couple of years ago, Chris does all of the design work and engineering. She also works with customers, helps manage the machine shop, and occasionally helps with production when needed. Chris owns a house in town that she shares with her two dogs, Marilyn and Mr. Sir, and her wife, Kim, who currently works on our sales team. In October 2021, Chris and Kim welcomed their daughter, Lucy Avivah.

Dennis is Eddie’s Wheels’ Machinist. He makes all the quad carts, therapy stands and training wheels, as well as any custom-machining that needs to be done. Dennis has an extensive background in machining trade, built his own CNC machine for his own shop. 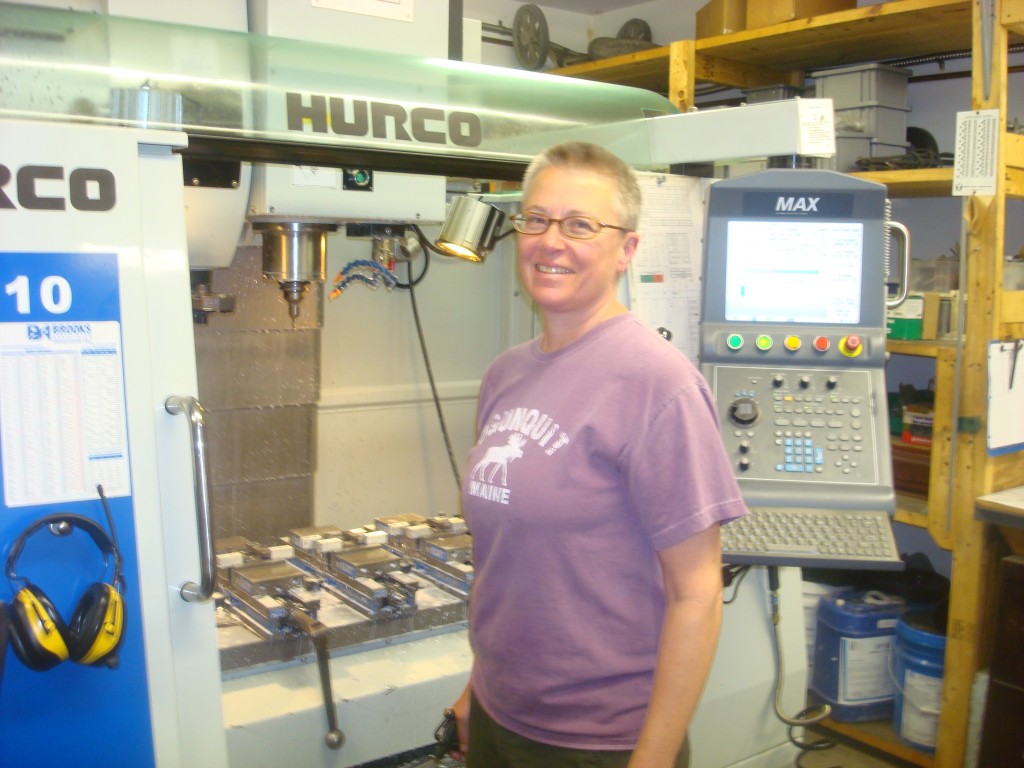 Cathy Stone is in charge of programming and running our CNC machine, which makes all our custom parts. After many years in the printing industry, Cathy retrained as a CNC machinist. She lives in Ashfield with her wife, Kathy and two cats. 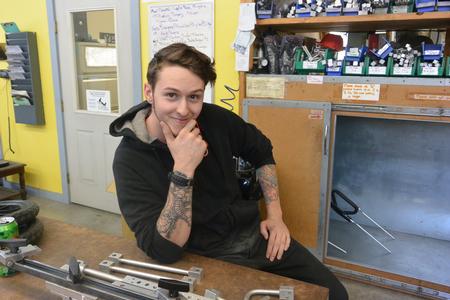 Tyler is the foreman of our shop. He enjoys bowling in his spare time along with fishing, working on his car, and eating sushi. Tyler lives with two wheelchair pups, Gordie and Bubbles.

Linda sews all of our harnesses and padding for our carts. She keeps us in "stiches". She like to quilt and spend time with her grandchildren and two dogs. 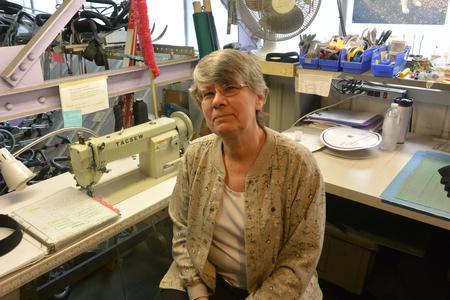 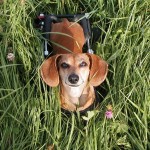 Chief Executive Dog, Ret. Daisy was born in Ecuador, raised in Jersey City and became disabled due to four herniated discs in 2001. Judged not to be a surgical candidate, she was surrendered to the St. Francis of Assisi Shelter who contacted us about wheels. We adopted Daisy in September of 2001 from her family in Jersey City, NJ. She has been a brilliant ambassador for disabled dachshunds, demonstrating an irascible spirit and feisty attitude that challenges anyone who would dare pity her. Daisy was 16 years old when she passed on from a stroke on Jan. 15, 2011. 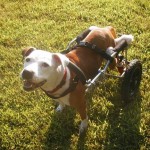 Sweet Pea came to us in 2006, after being rescued on Animal Precinct NY and spending many months at the ASPCA awaiting resolution of her case against her abuser. She was a remarkable ambassador for the Pit Bull breed, a truly gentle soul who showed compassion to each pet who came here. She received hydrotherapy for 2 years, prior to her last bout of disc disease. She was completely paralyzed in the rear and was the inspiration for the first adjustable tilted saddle – designed to work with the scoliosis she developed due to her injury. Sweet Pea loved to play with Willa and Webster. She was their Nanny dog. Never to be replaced, Sweet Pea’s remains lie beneath our peach tree, and the Hawthorne tree planted in her honor by her caregivers at the ASPCA. Sweet Pea passed away in the summer of 2012. 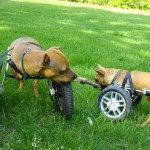 Willa and Webster are siblings, born with no forelimbs. They were rescued by Mutts n Stuff Small Dog Rescue in L.A. This amazing group contacted us to build them their front wheel carts and gave them many months of loving care and good socialization. Willa and Webster have taught us so much of what we needed to learn about the special challenges of front wheel cart dogs. Teaching them to master their carts has been truly inspiring.

Willa passed away in January 2016 of liver disease. 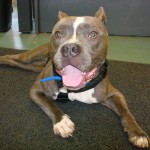 Beau was brought in to Eddie’s Wheels in November of 2012 with a 3 crushed vertebra as a result of being used a bait dog as a puppy for a dog fighting ring. Scar tissue showed puncture wounds around the site of the crush and he also had a shoulder injury which made standing on his front legs challenging. We adopted him in order to give him a level of rehabilitation that only we could provide: traction on our therapy stand to straighten his twisted spine, and regular physical therapy with our rehab practitioner and acupuncturist. Beau has made remarkable progress and will continue to progress. In 2018, Beau was rehomed to live with his canine rehab practitioner, Erika McElwey. 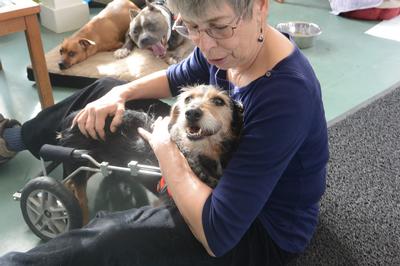 The newest member of the Eddie's Wheels family, Scooter joined our team in January of 2017. Ed and Leslie drove to sunny Florida to pick him up from LoveyLoaves Rescue. He has adjusted well to New England's ever-changing climate and absolutely loves the snow. Scooter is an 8 year old dachshund that is a spinal walker, which means that he uses his cart more like a walker despite the fact that he has no feeling in his toes. He is also bladder retentive and is teaching us how to express a male dog. He has fit in quite well with all the others here at Eddie's Wheels and already feels like part of the family. Scooter died in April 2018.