Nutmeg in her pvc dogs-to-go cart couldn’t reach the ground with her rear legs.

We received this email from one of our customers:

I saw your clip on NECN. I myself ordered my dog, Hobie’s, wheelchair from you. Back in November 2008 Hobie ruptured a disk in his back being the dachshund that he is, and although he did go for surgery it did not work. Being the huge animal lover myself I don’t think this could have happened to a better fit. I never once thought of putting Hobie down. I was told by the neurologist who did the surgery that if it did not work he would just become a “cart” dog as they called them. My first question was Hobie’s quality of life. If anything Hobie’s quality of life has improved over the years.He is a seasonal camper in the summer and if you ever saw him wheeling around that campground. Brings a smile to everyone’s face. I get the few people saying “poor thing” and I just chuckle to myself. Poor thing? Does a poor thing look that happy.He is the light in our household every day. My children adore him as does everyone else who comes across his loving personality.Thank you Eddie’s wheels for making the life Hobie and my family have today. Priceless.

Paralysis due to "slipped disks" is one the most common reasons people get dog wheelchairs. Long-backed dogs such as dachshunds, basset hounds, and corgis, and other dogs with a pre-disposition to calcified discs - such as beagle, pitbulls and cocker spaniels , can become paralyzed when disks herniate or rupture. Eddie's first dog wheelchair for his Doberman, Buddha, was due to paralysis from a herniated disc at thoracic-lumbar junction. Often this paralysis comes on with little or no warning. The traditional approach is to treat with anti-inflammatories, crate rest, and if the disk has ruptured and the dog is in pain, to do emergency surgery.

We were fortunate that Buddha was not in any pain - she just woke up paralyzed in the hind legs. X-rays revealed spondylosis and a suspicious disk - this was in 1990 when there were no MRI's for canines available. We were advised that a surgery at Tufts could be performed - but it was not within our financial means at that time. The design of Buddha's wheelchair was based on the premise that her tender spinal column needed to be supported in such a way as to do no harm, and to promote rehabilitation. The welded saddle supported her on her pelvic floor, and the yoke resting on her scapula met with our veterinarian's approval. After using the cart for less than 5 months, she starting walking again on her own, and did so for the remaining 3 years of her life.

We adopted Daisy, a 6 year old dachshund with four herniated disks in 2001. She had been judged to not be a surgical candidate, and although she had spastic reflexes , this was not a classic deep pain withdrawal reflex. We were told that rehab was hopeless. However, after 2 months of using her wheels, she took her feet off her stirrups and refused to keep them off the ground. Unable to keep up with her rear legs as fast her front legs carried her (she was a dachsund and had only one speed - run), she would push off with her rear legs and then hold them off the ground while she sped around. We worked to get her gait under control by walking up hills, which was easy living here in the Berkshires - our property had gentle slopes that inspired her to make use of her rear legs for traction. After a year, she was using her wheels like a walker, confusing everyone who saw looking like a normal dog walking in her cart. Daisy inspired thousands who met her over the next decade - representing us at numerous veterinary conferences and symposiums.

We have come to expect dogs with disk disease to improve over time with the use of our wheelchairs. Over the past decade we have worked with dozens of animal rehab practitioners who agree that a dog wheelchair is an invaluable tool for rehabilitating disk dogs. Walking in a wheelchair keeps their front legs and core muscles strong. 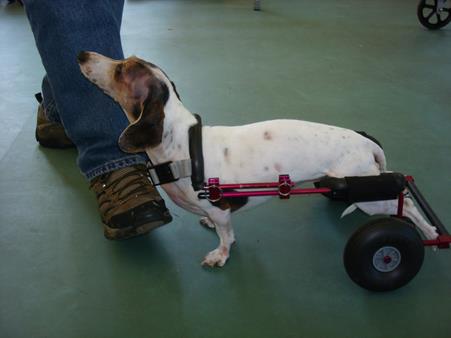 However, not all dog wheelchairs support dogs the way Eddie's Wheels carts do. We met Nutmeg, a dachshund who had disc surgery a year ago and didn't even recognize that she was a dachshund when she showed up here in a pvc-frame "dogs-to-go" cart that hiked up her rear end so high that I thought she was some kind of fox terrier. It took only a few minutes in one of Daisy's old carts for her back to flatten out and her posture to be restored to that of a dachshund.

Many of our clients have had surgery to relieve acute pain, and come out of surgery stable, but paralyzed. A cart restores their quality of life, allowing them to go for walks again and participate in all the normal dog pleasures. Daisy lived to be 16 years old, passing from a sudden stroke in January 2011. Here is Cordel, a typical dachshund, trying out his wheels for the first time.