Super Lance is back to playing ball in his power wheels

If ever there was a breed of dog who could take credit for the invention of the dog wheelchair, it would have to be the dachshund. We’ve seen photos of dachshunds in wheeled carts that date back to the 1930’s. Because their long back backs and short legs create stress on that fulcrum between the thoracic and lumbar spine, dachshunds have a predisposition to disc problems that often result in rear leg paralysis. However, their indomitable spirit makes it impossible to keep a dachshund down for long.

When we first started Eddie’s Wheels, we had intended to concentrate on large breed dogs, but it wasn’t long before we realized that we’d be building LOTS of dachsie carts. Then we adopted Daisy, a 6 year old dachshund with four herniated discs, in order to learn the finer points of building carts for this breed. After just a day of trying to keep her from dragging herself raw without a cart, we began to understand the challenges such little bundles of energy could present to a caregiver. Slings were useless. It was like trying to lassoo a snake – she’d wriggle right out of it. We built her wheelchair in record time.

Daisy loved to pose in her handknit sweater and her pink powdercoated cart. 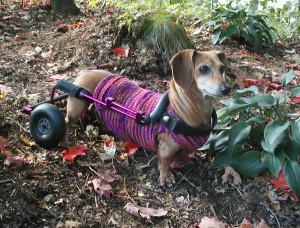 Daisy taught us so much of what we needed to learn about caring for a disabled dachshund, from how challenging it was to measure this wiggly dog, to bladder expression, and finally the progression from total paralysis to spinal walking. She lived for another 10 years, passing on this winter at the age of 16, and was active and healthy right up to the end, when she had a stroke.

She left us with a wardrobe of powdercoated carts that we had built for her as samples and show carts. Her legacy provides dachshunds who come here for measurements the possibility of going home with a Daisy loaner set of wheels while we build them their permanent carts. Daisy just happened to be the most common size of dachshund for whom we build carts – about 12 lbs, and 9 inches long between the front and rear legs.

Such was the case today when Lena came for a measurement, just days after her surgery for an exploded disc. Lena still had the staples down her back, but she fit one of Daisy’s carts and took right off in it. Her mom was grateful for the loaner, because Lena is not one to lay about for long. Here’s her video: