This is the one of the Doxicart. I had to completely tear this whole harness apart and re-sew it to keep it up.. My husband had to take the wheels off and grind wheel frame down so I could lower the back to fit him right… Only way to adjust. What a disaster… The seat is attached with plastic tie wraps.

A testimonial from a client who has tried 3 different carts!  She got it right the last time – with Eddie’s Wheels!

When my Dachshund became disabled from ruptured disks and 2 surgeries that were not successful, I was lost and devastated. I had never been faced with a situation like this. I didn’t even know there was such a thing as a wheelchair for a dog. So I went on a search to find him one.

I was very unsuccessful and lost a lot of money. I first tried one I discovered online from doxicart, and that wheelchair was also made specifically for my dog’s measurements. When I got it, it was just awful. He really couldn’t even use it.

So I looked into Handicappedpets.com and read and read and read. I thought that since this cart was so adjustable in every way, this was the one for me. So I finally purchased one from them. When it came it took me days to just put it together. It came with a video so I watched it several times. I finally got it put together to fit Barney. The first thing I noticed is how heavy it was. The box it came in says it is only 3 pounds. Well, that right there is the first “non-truth”…  Barney’s Walkin Wheels cart weighs over 4 pounds (I weighed it). The next thing is it comes with a harness that you have to put on the dog first and then put your dog into the cart and then connect the harness onto the frame. And if you are not really careful, you can pinch him which I did and really felt bad. That made him not want to even get into it anymore.

When I first put him in it, he just stood and looked at me like he was froze in it and he looked scared. I couldn’t even get him to go for a little walk with me at all. All and all, he just hated his cart. It was so heavy for him to pull. He looked like he was trying to pull a wagon, a heavy wagon.  When he would start to walk in it he would have to use both his front legs together to literally hop to get started and he would be so out of breath by the time he made just a few steps.

Dragging this cart earned it the nickname of “The Anchor”. The harness would not stay up without being tied on with a shoelace. 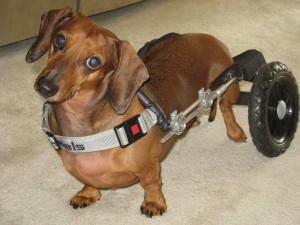 The most aggravating thing was the harness that went around his chest. He could only make a few steps and the strap would fall down around his legs and he couldn’t move. I tried so many adjustments like changing the belly strap and making it higher upon his chest until it was almost around his throat and it still wouldn’t stay up. I called Handicapped Pets and she told me there was another Dachshund that had one of their carts and he had the same trouble. I was told to tie a SHOE LACE from the front strap to the back strap that went across his shoulders. That also did not work. She told me that they had their designers redesigning that harness so it would  not fall down and I was put on a waiting list (which I am sure I will never get a call).

Their carts are the same prices of Eddie’s Wheels carts, and Walkin Wheels are made in CHINA.  So I started looking again on the internet and I found Eddie’s Wheels. Right off I I really loved the look of them, the way they were built and especially how they went around the shoulders. I called Eddie’s Wheels and even asked if they had any problems with the strap falling down around the legs. She said “oh no, our carts cannot do that”.

I talked to my husband about purchasing yet another cart for our little Barney. Since this was going to be my THIRD cart I had already spent almost $500.00 at that point on carts, so I was reluctant to purchase another one. So my wonderful husband told me to go ahead and get it for him and when the cart came I was soooooooo impressed. I only had to make very minor adjustments to it, I put Barney in it and he just really took off. From taking it out of the box to putting Barney in it was only a very few minutes. Now when he walks he don’t have to hope on his front legs to get the cart moving and he is just so much more comfortable in Eddie’s Wheels. We walked twice as far today and he didn’t give out like he did in Walkin Wheels.

Lightweight, easy to use, dog approved – Barney’s finally on a ROLL! 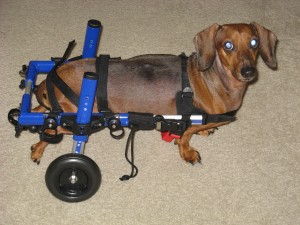 I would very, very highly recommend if you are looking for a wonderful  wheelchair for your pet, purchase an Eddie’s Wheels wheelchair. It will save you a whole lot of aggravation for you and your pet if you purchase yours from Eddie’s Wheels. You will LOVE it. I call Barney’s cart now his “Cadillac… ”  Thank you so very much Eddie’s Wheels.