Melbourne used this cart to rehab following cervical surgery, and eventually walked again on his own.

You might wonder what would possess someone to attempt to rehabilitate a quadriplegic dog.  Ten years ago we were faced with this dilemma ourselves: our 10 year old Doberman was suddenly rigid, stuck to the floor unable to lift her head and unable to use any of her four legs….Radiographs confirmed our worst fears – we had a Wobblers Syndrome dog.  Our vet suggested euthanizing her on the spot, but my gut said no.  She still took food from my hand, and I was convinced that she would heal.  Had we had a quad cart for her in 2000, she would have been a prime candidate for one, but we had not yet worked out a quad cart design.

Since then, quad carts have evolved to help hundreds of dogs suffering from temporary paralysis due to cervical disc disease,  spinal embolisms, traumatic injury. We make many different styles of 4 wheel support wheelchairs, from carts with detachable training wheels for dogs with simple balance issues, to full quad carts with tow handles and headrests. Here are a few examples: 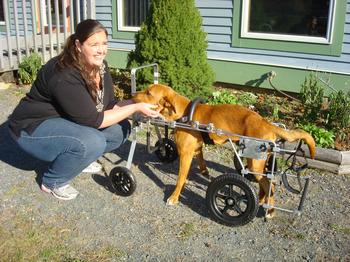 The common thread in all these applications is that we cannot even begin to know what a dog is capable of doing until he is supported in a healthy normal stance and given the opportunity to move all his legs.  This was the case of Billy Boy, a one year  old 50 lb. intact male mixed breed dog who was born with a hemi-vertebrae in his upper thoracic spine.  As a result of this deformity, he experienced violent spastic movements with his rear legs, and his front legs are hyper-extended at right angles to his body.  In order to evaluate Billy Boy, we used our adjustable therapy stand to hold him up in a normal healthy stance.  When we did so, we were able to provide support under his lesion in such a way as to decompress it, allowing his rear legs to come to rest.   Then we were able to position his front legs straight-down under his shoulders – however, due to completely underdeveloped pectoral muscles, he was unable to hold a normal stance with his front legs.

Notice the special details of Billy Boy’s cart – the adjustable tilting saddle, and front wheels placed wide apart and well ahead of his splayed front legs.

Working with his canine physical therapist, Judy Coates , Ed designed a cart with an adjustable tilting saddle, and an outrigger 18″ in front of him, so as not to interfere with his wide stance.  When we did his fitting, we adjusted the saddle to the right position to allow him to regain control of his rear legs. Billy Boy uses this cart now to walk around, and it’s hoped that as he builds strength in his pectoral muscles, he’ll no longer need the front wheels.

Here at Eddie’s Wheels we work with caregivers to design a cart that matches the pet’s disability and rehab prognosis, in order to give your pet the best possible quality of life, while the body takes its time to heal and strengthen.